The double-entry accounting system emerged in early merchant capitalism, and was one of the institutions that helped capitalism to coalesce into a system instead of isolated individuals.

The double-entry “accounting equation” is

In other words, the ALOE model understands accounting from the viewpoint of a capital owner.

The Resource-Event-Agent [REA] accounting system emerged from the development of computerized relational databases in the 1970’s, when duplicating a paper-based double-entry system in such a database violated the relational “normalization” rules: eliminating double entries makes the database simpler, and can provide the same financial reports. Bill McCarthy, who did the simplification work, aimed at the smallest number of concepts that could do the job[1].

However, the development of Enterprise Resource Planning [ERP] systems on relational databases started to look a lot more like REA than ALOE, partly because they also normalized their databases. ERP systems generally did not do double-entries except to generate them automatically for an ALOE system that was more like an add-on to satisfy the accountants than a core component to run the business.

The independent view of REA emerged from the development of supply chain systems in the 1990’s. In a supply chain, the individual businesses matter much less than the flow of resources from the tail to the head of the chain. Double-entries from the viewpoint of one company just confuse the picture. If each company in chain tries to capture more than their share of the value, they weaken the whole chain. (Which often happens…)

Moreover, supply chains began to become more like partnerships than arms-length traders buying in a “free market” by price. Auto companies distribute their bills of material (and more) to their suppliers and meet in an organization whose “mission is to enable collaboration within the automotive and related industries”. Apple invests in their suppliers. Toyota wants uninterrupted one-piece flow from the suppliers to final product. Business ecosystems begin to be conceptualized and consciously managed: more collaborative than supply chains. In 2014, Forbes declares that “business ecosystem” is the next big buzzword.

This has brought shared semantic models like REA (but not always exactly REA) to the forefront of supply chain and business ecosystem software development. (Given the evolution of business relationships, something like REA was bound to emerge, and more than one thing like REA has done so.) Blockchains are now starting to codify those shared semantic models. An ISO standards committee is now drafting a blockchain standard, and REA experts are on the committee.

The independent view of REA records economic events as they happen, recording the agents involved, with no accounting interpretation from the viewpoint of a single agent, “the owner”. Based on the basic economic event records, many interpretations are possible.

The economic events that involve externalities like waste and pollution will also need to be recorded, as well as the consumption or degradation of all other resources that are not now subsumed under “ownership” like air, water, and soil microbiota. Those records can be interpreted in the light of biocapacity and ecosystem health.

One useful interpretation is in the form of resource-flow graphs, which can be both visualized and computed over mathematically: for example, using input-output analysis. Here is an example of a resource flow graph that was used to analyze fisheries in Nova Scotia: 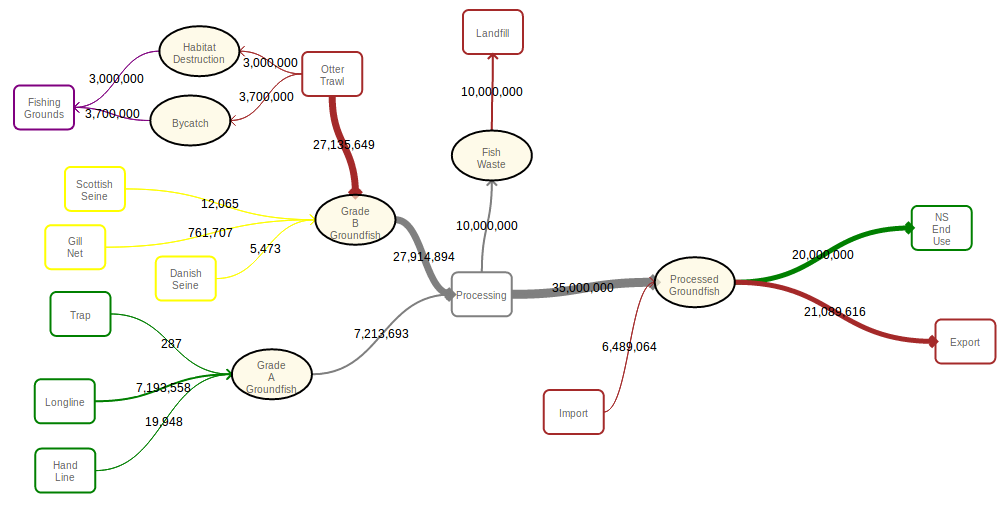 Here we can see the comparison of two different sets of fishing methods, Otter Trawl (big commercial trawlers that scrape up the whole fishing bed) vs Trap, Longline, and Handline (small-boat low-impact sustainable methods), and their effects on fishing grounds.

ALOE, based on capital ownership, does not make sense for a commons-oriented accounting system, whereas the REA independent view of economic events and resource flows does.

Implementations of the REA independent view in P2P-oriented software

NRP favors custody of resources rather than ownership, where custodial agents are responsible for the safekeeping of common resources but do not have ownership rights like the ability to sell the resources. Resource sales are delegated by the network to trusted “exchange firms”. The boundary between the producing agents and the exchange firms generates a semi-permeable membrane, which enables the creation of market value from common resources.

Also, NRP does not deal with people as employees. They are all free agents. They may be offered opportunities to contribute, but not ordered to do anything.

FreedomCoop’s Open Collaborative Platform [OCP] and LearnDeep’s software for their high school fab lab network in Milwaukee Wisconsin USA are forks of NRP. Freedom Coop is a project created by FairCoop which wants to create a complete “integral” economic system in Europe. OCP started out as a platform for Freedom Coop, but has expanded to incorporate several other Fair Coop projects including the Bank of the Commons. OCP added several features to NRP, including connections to their cryptocurrency FairCoin, and its blockchain Fair Chain. Fair Chain has a different consensus mechanism than Bitcoin or Ethereum, called “proof of cooperation”, which uses ‘Collaboratively Validated Nodes‘ (CVNs) to create new blocks.

LearnDeep wants to “upcycle” materials donated by local businesses and use them for student fab lab creations. They are adding “open inventories” to NRP, where the fab labs at different schools in the Milwaukee area can see what materials are available at all the other schools and from donors and request and move them from one school to another using library transportation systems. They will also use the NRP Recipe feature to share designs and methods, and will talk to Sensorica in the fall to explore design collaboration possibilities. Fair Coop is also planning to use open inventories between their “local nodes” and will use the same software features.

Locecon, the local economic analysis software, was based on the same model as NRP, but taken to a higher level, with aggregates of agents and resources, to analyze the potential and actual flows of resources within a community.

The Mutual Aid Networks (a project to organize cooperative local economies) have been using Locecon for analysis, and plan to use it in a feedback loop between the analysis and operational levels, where the actual events in the network feed back into the analysis and then back again as suggestions for improvement in operational projects.

NRP and all of its forks, as well as Locecon, are working proofs of concept rather than the systems that are required for the mutual coordination economy of the future. They are experiments. They do work, and are being used in practice in the organizations that originated the forks. But they are not architecturally suitable for a large-scale mutual coordination economy. Architecturally, they are platforms: that is, all of the participants use the same code, the same server, and the same database.

The next stage of experiments from the same people who have been developing the proofs of concept involves refactoring those systems into smaller components which can be deployed on decentralized infrastructures. While the components could be used on blockchains, we do not consider those to be either decentralized or flexible enough for the coming requirements, which we think will involve many agents of many kinds, both individuals and organizations, all over the world, in many domains, and need creative contributions from many people who need to be able to act independently and still be able to interoperate. Blockchains are like platforms to the extent that all of the participants use the same code and the same logical blockchain, although the chain may have many replicants.

So we think that future needs to be built on vocabularies and protocols instead of platforms, even cooperative platforms. This is happening in several projects, for example, the Open Cooperative Ecosystem (OCE) emerging from FairCoop.

The vocabulary for mutual-coordination economic networks is being developed in the ValueFlows project, which emerged from several previous projects including NRP, and uses the REA ontology as a foundation.

ValueFlows has started to define the required suite of components. The OCE project is now developing some of the apps. FairCoop is now using the first Agent app. The Mutual Aid Networks are looking at OCE and are collaborating on the first stages of development with people from FairCoop.

The collaborating participants in OCE are testing three different decentralized protocols: Scuttlebutt, Holochain, and ActivityPub. The Moinho community in Brazil is working with Scuttlebutt; FairCoop and the Mutual Aid Networks are working with ActivityPub; and the Holochain project is just starting now, with some primary implementations of sample crypto mutual credit currencies, which are a step towards the REA integration. The ultimate goal is to have the components work on all three protocols and be able to cross-communicate with each of them. Each of those protocols has pluses and minuses, and will be most useful in some situations but possibly not as useful in others. And then, time and practice will tell.

[1] This is an oversimplified story of Bill McCarthy's achievement. In doing so, he also studied the whole history of accounting and accounting systems, and database systems, and semantics and ontology, and was helped by a growing cadre of accounting rethinkers.